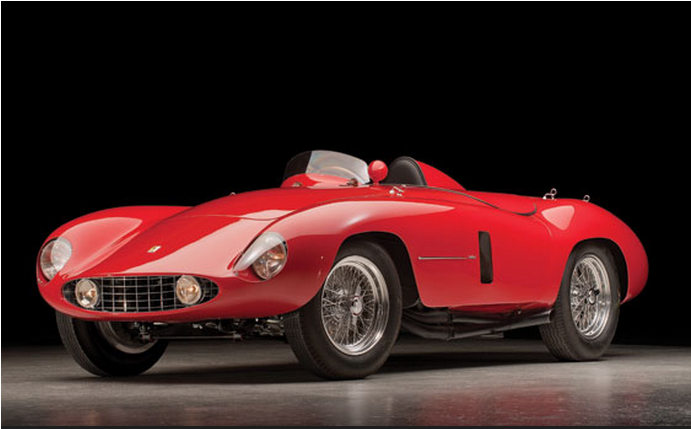 Notwithstanding its extraordinary movie career, this Ferrari 750 Monza is one of the finest examples built and, according to Ferrari authority Brooke Betz, the best example he has ever seen, on content alone.

Ferrari’s chief engineer Aurelio Lampredi proposed a four-cylinder DOHC motor, which he reasoned would be lighter and have more torque. Ferrari directed him to produce it for the 2.5 liter, 1954 season, and an early version – the 625 S – was tested in an F2 car at Bari in September 1951.

The 1952 season was quite eventful, when Alfa dropped out, and the World Championship was switched to Formula 2, which meant that Lampredi’s two-liter, four-cylinder 500 F2 engine was in the catbird seat. The car won 17 of 19 races in the next two years, and Alberto Ascari became World Champion in 1952 and 1953.

In the sports car world, Enzo Ferrari was faced with having engines that were too big and heavy or smaller and not powerful enough. He directed Lampredi to build a three-liter four-cylinder engine based on the 625, and the Tipo 735 S engine was built. It was a narrow-angle, DOHC four-cylinder, and it was quite successful in 1953 in the hands of Mike Hawthorn and Alberto Ascari, at Monza, in the Dolomite Cup and at Senigallia. But Ferrari was convinced he was on the right track, and Lampredi tweaked the design further.

The new engine was called the 750, as the bore was increased to 103 mm. The narrow-valve angle cylinder head was replaced with a wide-angle 80-degree head, with bigger valves and enormous 58 DCOA3 Weber carburetors. The engine was installed in a wider Tipo 501 GP chassis, and the 750 appeared at the Monza Supercortemaggiore 100-km race on June 27, 1954. Umberto Maglioli and Mike Hawthorn won, and Froilan Gonzalez and Maurice Trintignant took second, giving the new Ferrari its name – the Monza.

The eighth of 35 750 Monza spyders to be built, s/n 0492M began its illustrious career on the Ferrari stand at the Brussels Motor Show in January 1955. One of the first cars with the improved coil spring front suspension, it was delivered to importer Jaques Swaters with a startling snakeskin interior, photographs of which still exist. The car was returned to the factory in February, then sold to Luigi Chinetti in New York in April, who delivered it to Los Angeles-based U.S. Porsche importer John von Neumann on April 30.

Neumann promptly went racing in California. On April 30th, he took second place at the Bakersfield preliminary race, followed by another second place the next day in the main event. Von Neumann finished on the podium again at the Santa Barbara preliminary on May 28, though he did not finish the main event the next day. He’s pictured on Page 47 of August 1955’s Road & Track magazine.

On June 5th, von Neumann won at Santa Rosa and joined Phil Hill for the Torrey Pines race on June 10, where the pair finished 2nd. S/n 0492M is pictured in October’s Road & Track on page 33. Hill raced s/n 0492M in the Santa Barbara preliminary on September 3, finishing 2nd, and some reports have him DNF in the main event on September 4. Hill was due to race s/n 0492M at Salinas on October 1, but it proved to be a frightful weekend. James Dean was headed to Salinas to race his Porsche 550 Spyder but was killed in Paso Robles on his way from von Neumann’s showroom. The next day, Hill came in from practice and was told to call home. Don Parkinson, a well-known racer married to Hill’s sister Helen, had passed away. Hill rushed home to Los Angeles and the car did not run.

Von Neumann bought a new 750 Monza, s/n 0582M, with which Phil Hill won at Sacramento, then brought both cars to Glendale on November 13. He lent s/n 0582M to Hill, who won, and von Neumann finished 6th in s/n 0492M. Hill raced s/n 0492M once more, in January at Torrey Pines, and then von Neumann sold it to Harrison Evans in February, who would keep the car busy through 1956.

Evans’ first outing was March 17, when he placed 3rd in the preliminary event at Santa Barbara, following up with a 4th in the main event the next day. He’s pictured in the May 2006 issue of Forza magazine. On May 19, Evans had an off day, finishing 10th at Bakersfield, but he improved to 6th in the preliminary race at Pomona on June 23 and hit his stride in the main event with a 2nd place.

July 21-22 Evans went to San Diego and managed 2nd in the preliminary, then bent the shift fork in the main event and did not finish. Brighter days lay ahead. On August 18-19 Evans competed in the inaugural Paramount Ranch races, placing 3rd in the preliminary, then winning the main event. He is pictured on page 6 of Sports Car Journal magazine and on page 33 of Paramount Ranch Remembered by Art Evans.

Back at Pomona on October 20-21, Evans was 4th in both preliminary and main events. He entered the Palm Springs races November 4 but did not start. Evans’ last race in s/n 0492M would be November 18, 1956 at the site of his earlier triumph – Paramount Ranch.

S/n 0492M’s next appearance was in the February 1957 issue of Road & Track, where it was advertised for $7,000, described as red with a gray interior. It was eventually leased or perhaps even bought by Stanley Kramer Productions in Hollywood, on its way into movie history.

Kramer was making the apocalyptic thriller On the Beach, based on the doomsday novel by Nevil Shute Norway, about the after-effects of World War III. The movie starred Gregory Peck, Ava Gardner and Fred Astaire, in his first non-singing, non-dancing role. In the story, Australia is the last place on earth where human life survives, but the radiation cloud from all the nuclear bombs is drifting that way.

Gregory Peck is Captain Dwight Towers, whose nuclear submarine the USS Sawfish is all that remains of the US Navy, and he is stationed in Melbourne, Australia. As the survivors struggle to keep stiff their upper lips, he makes the acquaintance of Moira Davidson (Ava Gardner), who has already decided there’s nothing to live for except the next party, and Dr. Julian Osborne (Fred Astaire), the scientist trying to calculate exactly how long everyone has left to live. Astaire’s character has always wanted to be a racing driver, and when the Australians decide to hold the world’s very last Grand Prix, Astaire buys s/n 0492M to enter.

While the movie was highly praised and is still controversial, the movie set was eventful, to put it mildly. The film was shot in and around the city, and the race was to be set at the Phillip Island race course.

While two days of filming took place at the Phillip Island race track, not much footage made it into the movie. The “Australian Grand Prix” takes place with hills in the background and is recognizably shot at Riverside Raceway in California.

Eight cars were totaled in 12 days of filming at Riverside, including a Jowett Jupiter, MG Special, Nash Healey, Austin-Healey, Jaguar XK120 and a Corvette. California sports car drivers filling out the field included Dan Gurney, Max Balchowsky, John Timanus, Chuck Porter and camera car driver Skip Hudson. Stunt drivers Carey Loftin and Dale Van Sickle did the crashes, and some cars were towed to their doom. A DVD of footage from this film is included with the sale of the car, depicting Fred Astaire’s character as he charges through wrecked cars and dangerous turns to take the lead.

After filming, 0492M was returned to Chinetti Motors in July 1959 and stored in Chinetti’s warehouse in Greenwich, Connecticut, until it was sold to Jim Sokalski in Los Angeles in about 1968. The car then changed hands through a known sequence of owners until it was acquired by Peter Kaus of Frankfurt in 1983. He showed s/n 0492M at the Wiesbaden Ferrari meeting in May 1993, the Auto Becker “Ferrari Days” in Dusseldorf in 1994, and at the 30th annual Essen Motor Show in 1997. Kaus kept s/n 0492M in his Rosso Bianco Collection until he sold the entire collection to Evert Louwman’s National Automobile Museum in Holland in March 2006. S/n 0492M was finally acquired by the current owner in 2006, joining one of the country’s most respected sports car collections.

Accompanying s/n 0492M is a February 2011 inspection report by Brooke Betz of Newport Beach, California in which he declares it is “on content alone, the best 750 Monza I have ever seen.” Betz continues that all stampings and numbers look original, and the recent two-year restoration by Tom Beauchamp (bodywork), Steve Blaine (engine and mechanicals), Fenders Restoration (paint) and Auto Weave (upholstery) is excellent and thoroughly documented and photographed. There are numerous period photographs, video footage of Harrison Evans winning the Paramount Ranch race, and of course the Grand Prix film from On the Beach. Even the smallest details warrant close inspection – the rare Scaglietti script badge and chrome spears are even in place. According to historian David Seielstad, the “script” badge only appeared on 10 or 11 Ferraris.

Thanks to a complete and documented restoration, s/n 0492M’s future seems assured. It may well lead back to the race track, where it was so successful in its early years. The movie heritage is just icing on the cake, but one can safely assume there isn’t a classic car event in the entire world at which this car would not be welcomed with open arms

Now it is time to join us to taste the delicious cuisine on offer at Trattoria Maranello on the Melkbosstrand beachfront. click here for more..

Print
Your privacy is important to us. We use cookies to ensure that we give you the best experience on our website. For more information about our compliance with PoPi and GDPR refer to our Privacy Policy. To remove this notice please signify your acceptance.
I accept